Social media is undoubtedly popular. Thanks to digital platforms for the exchange of ideas, content and information, communities are being created, and individuals are being given the opportunity to speak out like never before. It’s an exciting, lucrative medium for sharing content and building communities. This is a digital space that already exists.

But, the current Web 2 social networking model has some drawbacks that need to be addressed. In this article, we will look at the problems and potential ways to solve them using the exciting idea of decentralized social platforms, the so-called social media Web 3.

Although social media has the potential to bring together people with similar interests, the way platforms are currently used has some obvious “distortions”, and most of us are aware of these pitfalls. How do decentralized social networks differ from them?

Transparency? Never ever heard of it…

The problem is that when you say “yes” by subscribing to the platform, you don’t quite know what you are agreeing to. This is not due to a lack of care or patience when reading on your part. This is because the platform does not disclose how it uses your information.

The actual model does not allow users to own or monetize their data, attention, or media. You and I, in fact, feed these platforms with a huge amount of free multimedia and information, without getting anything in return.

But why? Yes, because if you don’t pay for data, you are a product. Social media thrives by taking your data and selling it to marketers, taking an algorithm and manipulating your experience. If you are a businessman, you pay for the data. If you are a user, then this is your data being sold on your behalf.

In other words, if you are trying to get at least some audience on social networks, you need to pay a lot of money for it. Social media marketing is a huge industry where targeted and sponsored advertisements circulate through channels and lurk at every corner. If you are a businessman, you pay for it. If you are a user, then you have to pay for a free subscription with a flurry of advertising. You don’t get rewarded for the attention you have to give them.

Let’s call it as it is: this is digital exploitation.

There is a solution to the problem

Where traditional social media fails, there is a more sophisticated, community-based model that can pick up the social baton and jump over problematic obstacles.

These are decentralized social networks.

The beauty of decentralized social networks is that, depending on the platform, they are arranged in the same way as other social networks. Post content, share it, collaborate, comment, double-tag and hashtags at your discretion. But decentralized platforms provide additional components: a community-oriented approach that promotes transparency, privacy, and incentives.

Each platform works a little differently. and it has its own approach to solving the problems faced by centralized social networks. Therefore, in order to explore the benefits, we will talk about several decentralized platforms taken on Coinmarketrate.com, and about how they’re going to change the game.

STEEMit is focused on blogging and publishing content. It is similar to the blockchain-based combination of Reddit and Medium, and rewards users with its own STEEM cryptocurrency for publishing and engaging in content on the platform. And this is what distinguishes STEEMit from traditional analogues.

Users receive financial rewards for their “updates” and content. Content develops its own ecosystem, and a digital economy can be formed on the platform.

Aave is another project that seeks to break boundaries on social media. Recently, the founder of Aave blabbed in response to the words of Jack Dorsey from Twitter that Aave should build Twitter on Ethereum. This was in response to Dorsey’s plans to create Twitter based on blockchain.

While it may have been a cheeky response, the tweet has its weight in future plans. The founder of Aave confirmed that they are going to launch a decentralized platform that will act and function like Twitter, but will offer content creators a space to fully own and monetize their content.

For users, this platform will become part of a thriving ecosystem based on the Ethereum blockchain, with great potential to profit from content without the participation of the platform. But, there is one thing, but…

This is the appearance of the Metaverse.

The metaverse presents a “terrifying danger”

The metaverse, an immersive virtual world connecting countless digital spaces, became one step closer to reality when Facebook’s Mark Zuckerberg made it one of his key priorities.

While some critics are skeptical about how revolutionary the metaverse can turn out to be, Dr. David Reed, professor of AI and spatial computing at Liverpool Hope University, is confident that it will immeasurably change our entire lives in the same way that the Internet has done.

However, he also believes that, in addition to the huge benefits, it also represents a “terrifying danger.”

Reed calls for urgent negotiations on how to protect metaverse users before the technology becomes a reality in the next five to ten years.

“The metaverse has huge implications. It has fantastic advantages and terrifying dangers,” he says.

“And we need a very reliable system to control it. Obviously, we are at the very early stage, but we need to start discussing these issues now, before we go down a path from which we cannot turn away. This is very important for the future.”

The risks associated with the metaverse, according to Reed, are in general control, as well as in data collection and protection.

“Because if you think about how it works, the ultimate goal of the metaverse is not just virtual or augmented reality, but mixed reality. It’s a mix of the digital and the real world. Eventually, this mixing can be so qualitative and pervasive that the virtual and the real will become indistinguishable. And the market for this is gigantic. Whoever controls it will control your entire reality.”

Reed says that many modern prototypes of VR systems are equipped with face, eye, body and hand tracking technologies, and most of them have sophisticated cameras.

“Some even include electroencephalogram technology to pick up brain waves. In other words, everything you say, do, look, or even think can be tracked using magnetic resonance imaging. The data that will be obtained as a result will be huge… and extremely valuable,” he says.

“That’s why we need a system that will control them. No company should exercise control — it’s just too important for this to happen. This should be cooperation using open standard protocols, when the standard is freely available for adoption and dissemination by others, just as the World Wide Web developed.”

Reed points to the fact that there is a World Wide Web Consortium (W3C) on the Internet, which was influenced by the founder of the web, Tim Berners-Lee, who adheres to the principle of openness. The metaverse, Reed argues, needs its own specialized equivalent, and very quickly.

“The W3C encourages participation, knowledge sharing, and thereby builds trust on a global scale. This affects how the Internet functions. It’s not a business, and it’s not a government.  It is an independent organization that takes care of standards.

Metaverse needs the equivalent of W3C, and this should be decided right now, because all the technology companies I know consider this as part of their future income.”

According to Reed, if we act now, the world will have a better chance to cope with the security risks in the metaverse, as well as the threat of bullying and theft of social media data in this mixed reality universe.

“If you think about how much data a company can collect in WWW right now, compared to what it can collect in the metaverse, it just doesn’t compare,” he says.

“But think about this: if you have an avatar in the virtual world, are you the owner of it? Do you really own the way you look? Can you hack someone’s avatar and appear as someone else? How do you know that you are really talking to the person you are thinking about?

This is happening now on the Internet, and in the metaverse the threat will be much greater,” says Reed.

“You will be able to own things and have possessions in the metaverse, but how will you protect them?

Right now, people are concerned about the impact that Twitter can have on politics. But in a completely immersive environment, how much more influence can you have on someone?

Similarly, how much more dangerous can social media or online bullying become in the metaverse? I would say it could get much, much more extreme. The visual experience of immersion can be extremely emotional,” he explains.

However, Reed believes there is also good news for the industry.

“I think metaverse is the next computing platform. This is the next evolutionary step, not only for the Internet, but also for computing in general,” he says.

“Besides, no one knows how many jobs the metaverse will create, but it will spawn a whole new industry.” And, of course, with all the disadvantages, there will be huge advantages””

This is how things are with the metaverse, but the beauty of decentralized platforms on the blockchain is that they can give users, not what they want to take away from them. The main focus on the community is on the excellent approach – “power to the people”.

The result is transparency between those behind the scenes of the platform and users. There is an exchange of information, the system encourages the creation of content and attention. Instead of a hierarchy where the platform monopolizes monetization and cashes in on user data, as Facebook did, and offers Meta, this is a social symbiosis where everyone wins.

Decentralized social media are nothing new, but they are gaining momentum. With the growth of attention, comes the growth of funding, which gives platforms and projects resources for development.

As more and more networks grow from decentralized roots, we will see user-centric social ecosystems based on individual data ownership. And how useful (yes, literally) this space will be.

So keep an eye on this space, a radical revolution in social media may already be on the horizon. And it won’t be Metaverse.

Until September 2020, Polkadot was virtually unknown to ordinary investors. By November 2020, its market capitalization was $ 5 billion. ... 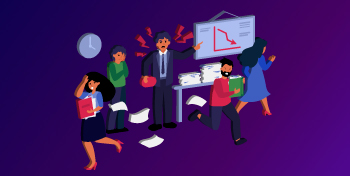 In the trending decentralized Finance industry, the blocked value has dropped significantly over the past two days. The sudden decline ...

Many complain that Bitcoin suffers from slow and expensive transactions. How to solve this problem? Why does Bitcoin need the ...