On the Ethereum blockchain, cryptographic tokens can be of different types, each of which is determined by whether they are interchangeable or not. The degree of interchangeability of the token is represented by one of the three standards of tokens on Ethereum – ERC20, ERC721 and ERC1155.

In this article, we will look at the meaning of ERC tokens in general, and delve into each of these three token standards.

In the cryptocurrency space, the beginning can be confusing. To begin with, we should consider such terms as token standards, ERC20, ERC721, and so on. All this may seem incomprehensible to you now, and unnecessary, but … their concept becomes very simple once you know what role they play.

So, what are ERC tokens?

If we look at Coinmarketrate.com and if we dig into the history of the crypto space, we will find out that coins appeared first. The story begins with Bitcoin, the first blockchain network. Bitcoin was designed to allow people to make global peer-to-peer payments using their native currency, also called BTC. Then similar blockchains appeared, such as Litecoin (LTC) and Dogecoin (DOGE), which offered a similar use case.

All these cryptocurrencies living in their own blockchain network are called coins.

What are ERC tokens?

The Ethereum ecosystem is decentralized, but it still needs someone who will set the rules, call for updates and set standards that define what is possible on the blockchain. To do this, Ethereum users themselves must create Ethereum Improvement proposals (EIPs), discuss their details and vote on them in order to either reject or begin their implementation.

Currently, there are several types of EIP for various categories of improvements and additions. One of these types was identified by the main developers of Ethereum to propose, discuss and implement various technical standards for creating tokens, smart contracts, applications, wallet formats, etc. on Ethereum.

This subcategory of EIP was named Ethereum Request for Comments, also known as ERC. To date, there are many requests for Ethereum comments to establish standards for tokens that can be created on this system. Thus, all tokens created on Ethereum must follow the standards set by these ERCs. Therefore, they are called ERC tokens.

To date, there are three ERC standards that are most widely used in Ethereum:

And in case you’re confused, the numbers after ERC are just the ordinal numbers of the “requests for comments” in which these standards were proposed.

But what do these standards mean and why do we need them? Let’s find out.

Understanding the Standards for ERC Tokens

ERC20: The standard of interchangeable tokens

First introduced in 2015, ERC20 is a token standard that allows developers to create interchangeable tokens for their Ethereum-based applications or protocols. What can I say about them?

This means that you can exchange these tokens on a one-to-one basis. It won’t matter which UNI you own, because their base value will always be the same as all other UNI tokens.

With the expansion of the scope of blockchain technology, there was a need for tokenization and presentation of unique data in the blockchain. It was then that the ERC721 token standard was introduced. The ERC721 standard allows you to create non-interchangeable tokens, that is, tokens, each of which has a unique value and acts as verifiable unique digital objects that cannot be exchanged with each other like ERC20 tokens.

So, let’s say you want to present a work of digital art on the blockchain. You obviously cannot use the ERC20 token for this. Instead, you can use the ERC721 standard token to create an NFT artwork. This NFT of a piece of digital art can easily prove the authenticity of this piece of art, and a record of ownership of it.

Since the record of the ownership and identity of the NFT artwork is immutably stored on the blockchain, this also makes it almost impossible to fake the original work of any artist.

The problem with the ERC20 and ERC721 standards is that they allow one smart contract to support only one type of replaceable or non-replaceable tokens. Thus, every time you want to deploy a new token, you have to write a new smart contract. In addition, the two aforementioned standards do not offer a way to create translucent tokens.

This led to the creation of the ERC1155 token standard, which allows Ethereum developers to create interchangeable and non-interchangeable tokens using the same standard. In addition, using ERC1155, it is possible to create a single contract to support several types of individually configurable tokens, which reduces the complexity of the token creation process. It turned out a little difficult, didn’t it? Let’s simplify this.

Suppose a developer wants to create an NFT game, and plans to create one interchangeable token to be used as in-game currency, and several non-interchangeable tokens for unique in-game assets such as skins, weapons, goods, etc. If they use the ERC20 and ERC721 standards, they will have to write new smart contracts to support each new type of asset they create. However, using ERC1155 will allow them to write just one contract to support all kinds of tokens they want to have in the game.

All this does not mean that one of the standards is better than the other, they just have different fields of application.

Ethereum has very well advanced blockchain beyond just technology for secure digital money. And the ability to offer and set new token standards creates more opportunities for new use cases of this already popular network.

Thanks to this innovation, today an artist can create a unique token representing his work of art, authors can present a shortage of their creations and monetize their work, game developers can give real value to their gamers with in-game items, and on the Internet you can create a completely new, user-driven economy… something that no one had ever thought about before, or even imagined. 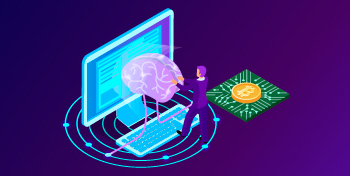 Will quantum computers mine faster than the traditional ones? Well, yes but it’s important to distinguish theory of practical application. ...

As CoinMarketRate.com claim, considering the speed of Ethereum growth, it should grow by about 156% to catch up with Bitcoin, ...

Bitcoin is a community that according to Coinmarketrate.com, originates from 2009. We are talking about decentralization and the transfer of ...